CHARLOTTE, NC – Concerned Veterans for America Action (CVAA) on Wednesday announced its support for Rep. Ted Budd (R-N.C.), highlighting the lawmaker’s record on veterans issues during his time in Congress. The group will mobilize its field staff to speak directly with voters and will conduct a direct mail effort highlighting Budd’s record on key veterans policies.

CVA Action Senior Advisor, Dan Caldwell, had this to say about the group’s support:

“We are committed to supporting those who have supported our veterans, and Rep. Budd has consistently voted for pro-veteran policies while in Congress. With his votes in support of increasing health care choice for veterans and bringing much-needed accountability to the VA, he has shown a true commitment to ensuring North Carolina’s veterans are a priority. We urge all voters in North Carolina’s 13th District to vote for Rep. Budd in November.” 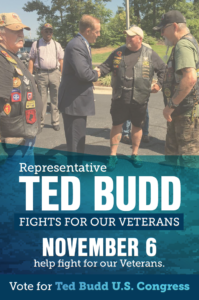 Notably, Rep. Budd voted in support of the VA Accountability and Whistleblower Protection Act, a law to ensure bad actors at the VA can be held accountable for their actions, and most recently the VA MISSION Act, a law to provide more health care options for our nation’s veterans.